Up Early for Whale Sharks 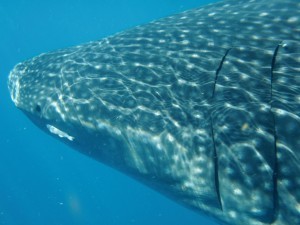 We got up early so we could be at the gasoline dock by 7:30 am to meet our whale shark boat. Ramon (although affectionately called “Pelon” by the locals) was our guide. He was a nice guy. Talked a bunch and was obviously passionate about whale sharks. http://www.islawhalesharks.com/

We met some of the other people on our trip and waited for a few others. Before we knew it, Ramon dumped us off onto another boat. Since were were only 2, it was easy for him to have us go with another group. We didn’t know at the time, but this actually turned out to be a good thing. So we proceeded to another boat with 6 other strangers, got acquainted and left the dock for the open ocean.

We sped out past North Beach on our way to where the whale sharks were feeding. We passed a few dolphins and turtles on the way. About an hour or so later  the boat slowed as we approached a grouping of other boats out in the middle of the ocean. We had our first glimpse of a fin and became very excited. As we got closer, the fins broke the surface everywhere. There must have been 100 of them spread out across the area. There were probably 30 other boats as well.

We took turns 2 at a time in the water with a guide. When it was our turn, we donned our fins, mask and snorkel and jumped into the wide open, no-land-in-site ocean with the world’s largest shark.

The sharks were HUGE and although it looked like they slowly glide through the water, we swam as fast as we could to keep up. Some of them are bigger than others and getting too close could cause you to get whacked by their immense tails. We had a few close encounters where they practically ran into us. It was a little intimidating, after all, they are wild animals and we’re interrupting their breakfast.

After  absolutely incredible  encounters with these amazing creatures, we headed back to Isla to snorkel along the reef to the lighthouse. Then we anchored off North Beach and enjoyed fresh ceviche and cerveza!

Afterwards we wandered around town and went to the bank to see if I could take out money on my Visa. No luck. Plan B – figure out another way to get cash.