Back to Cancun to pick up the rental car 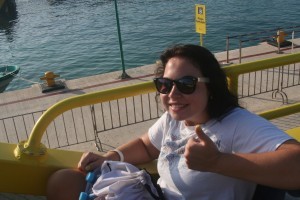 Ferry back to Cancun.

Took the ferry back to Cancun and decided to pick up our car from a closer Avis location so we could save some cash (remember, the ATM ate my card so we have limited cash on hand). So we took a cab to Mayafair in the Zona Hoteleria. We arrive and they don’t have any cars. Carmella, or should I call her Helga; she was large, homely and I seriously thought she had a hairy mole on her face, was not nice and acted quite put out that we had to make her retrieve a car from the airport. Anyway, being delayed an hour, because we had to wait for the car to arrive, sort of worked out in our favor. Now we had an extra hour in which to return the car to the airport the following Wednesday. However, unbeknownst to us, Helga had a trick up her sleeve…one we would not discover until much later that day.

So, we picked up our car, I handed Alyssa my tablet (7″ Nexus 7) with Google Maps of the entire Yucatan cached, and we headed off to the Cuota. Alyssa was the official “navigatress”. It was her job to navigate me out of Cancun and to the Cuota. Driving down the Zona Hoteleria, I got used to our “Dodge Hyundai”and picked up some driving tips from the locals. 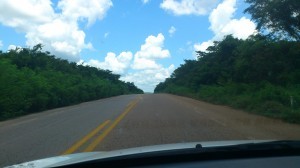 I automatically won the bug game.

On long road trips it’s always a good idea to have something to keep you busy. Merida is about 300KM from Cancun. Although we stopped at Ek Balam on the way, it’s a long boring stretch of road and literally NO exits, NO towns, NOTHING, well except 2 toll booths (hence the name “Cuota”.) So I decided to teach Alyssa the bug game that Greg and I have developed over years of traveling. We divide the windshield in half down the middle. Each player gets a point or two for each bug splat on his side. When we stop, we check the headlights. Headlight hits are more points. Things started off going equally well for both of us. A bug here, a butterfly there. BAM!!! We hit a bird! It was on my side and did make a mark. Good thing it didn’t crack or even break the windshield. So after that jarring surprise, we decided that hitting a bird is an automatic WIN! I won! 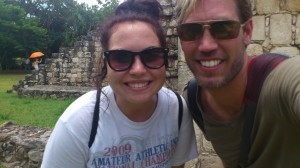 It was extremely hot at Ek Balam.

After following the signs off the cuota through a few small towns and down a very pot-holy road, we arrived at Ek Balam—Alyssa’s first foray into the Mayan world. Not having been here myself, I was very excited too. We bought our 2 tickets (you buy one from the state and one from the govt. and you have to get them at separate windows—bienvienido a Mexico!) and proceeded to the entrance. A man, who had previously insulted me (in Spanish) asked if we needed a guide (all in spanish of course) and I laughed at him and said “no”. Yes, I understood you, duh.  We walked through the jungle to the entrance.

The temples near the entrance were dwarfed by the HUGE pyramid way in the back. We wandered through and climbed the big one. It was so incredibly hot that the only thing that kept us going was pure amazement of the site. At the top of the temple, we could see for miles around, including many other buildings and outcroppings from the tops of the trees of the jungle. The breeze at the top was welcomed with “ahhhs” and “ooohs” from the crowd a the top.

Petrol Station Scam and Paying off the Police – Bienvenido a Mexico!

A trip to Mexico wouldn’t be complete without getting scammed or paying off the police. This trip proved no exception. The Pemex in Valladolid is notorious for scamming gringos out of pesos. He fills you up, you hand him the money and then he quickly switches out a bill for something smaller insisting that you didn’t give him enough money. Having already been scammed by this guy once (happened to Greg and I on our last trip there, Oct. 2011), I knew what he was going to do. I made sure not to give him much more than the total. Sure enough, my 220 pesos ( 100 + 20) that I gave him magically turned into 40 ( 2 2o peso bills). He insisted that I shorted him. I insisted I gave him 220. Rather than argue with this guy and demanding change that he’ll never give me, I told him off, rolled up the window and drove away.

Not long after getting back on the Cuota was the toll station. Cars stop to pay a toll similar to how it works here in the states. After the toll, the police flag me over to stop. I stop, he asks for rental papers and my drivers license. He asks where I’m going. I reply. He inspects the papers more and finally waves me on. Ok, fine whatever. Well, not so fast. Coming into Merida and paying the final toll, the same thing happens. Police wave me over to stop. He asks for rental papers, drivers license and this time our passports as well. Then he asks me to get out of the car. Of course he doesn’t know a lick of english, but my broken spanish seems to get me by. He inspected the rental papers very closely and discovers (remember how I told you Helga the rental car lady had a trick up her sleeve) the license # on the rental agreement does not match the car. Now, I know the drug cartels use tourists to do a lot of their dirty work, so I’m thinking I should just do whatever this cop wants instead of making a scene about it and getting into more “trouble”. He said I was in trouble and have to pay him an “infracion”. 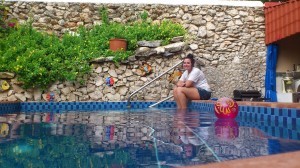 Cooling off after our drive to Merida.

He kept repeating himself over and over and finally said 400 pesos. I said it wasn’t my fault, it’s a rental, he didn’t care. 400 pesos or I get in more trouble. Fine. I get it.

Alyssa was watching from the passengers seat as I spoke with the policia. Finally I lent into the car and said “give me 4oo pesos, I’m paying off the cops”. She immediately says, “WHAT!!!” and nervously laughs. Yeah, I’m paying off the cops, give me 400 pesos. She dug it out . Before handing it to the policia I asked him if we are good (not wanting to change his mind and say that I now owe him more). He says yes. I wait, expecting him to write me a ticket. He doesn’t and basically waves me on. Ok, I was just scammed out of 400 pesos. But so what, it’s about $30 and will probably feed his family for a week. I was hot and tired and just wanted to get to Merida.

We sped off to Merida to find  La Casa Lornezo. Navigatress Alyssa keenly guided me through the cramped one way streets of Merida to finally arrive. We were about 10 mins ahead of schedule and Larry was pleased to see we made it without too much drama. It was hot, we had a margarita and cooled off.

Merida – An Awesome City in the Yucatan! 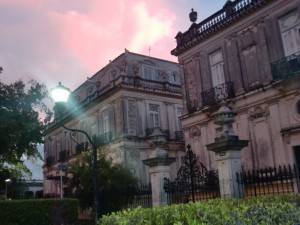 After cooling off, we needed to get some dinner. We asked Larry if it’s safe to walk around Merida. He replied that Merida is so safe that women can walk home safely at night. Completely assured, we set off to the Zocalo (main plaza) of Merida. We headed down Paseo Montejo,  and, now that we had access to money, stopped at an ATM (Oh yeah, we decided to have Alyssa’s parents put money in her account and we’d just use her ATM card for the whole trip.) So we have the money situation sorted out.

Merida on a Friday night was bustling with activity. People everywhere on the streets, vendors, entertainment, kids laughing and playing, parents drinking and socializing, and people young and old on dates for a night on the town. Tourists from all over Mexico flooded the zocalo turning it into a big party. We walked around, helped a kid get a toy bird out of the tree (afterall, I was the tallest person around), marveled at the architecture, the cathedral, the museums, the square, the shops, the people. Merida is an AWESOME city and I can’t wait to go back. 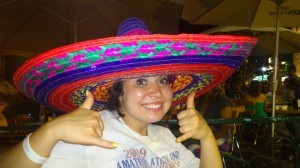 We landed at La Parranda and sat at a table in the street. They close of the streets of the Zocalo after 8PM for the restaurants and vendors. It kinda becomes a big social street fair. We had super nachos and drank lots of beer. Alyssa bought a Sombrero. She haggled the guy down to a good price. I was impressed with her negotiating skills. We watched the world go by. We stumbled home. It was great.

Posted under Photos,travels
Comments Off on Aventura Mexicana – Day 3 – Ek Balam and Merida!