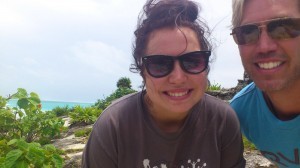 Tulum is a beautiful site right on the ocean.

So we got up this morning to a sustained wind and decided to do a little hurricane preparation. We went shopping for some food and cerveza with the anticipation that we’ll lose power and the restaurants may be closed. We talked to the building manager and asked her if there is anything we should be worried about. I had already scoured the web for all the info I could, and concluded that we are not in any mortal danger, but thought I’d get a locals opinion too. She said, nothing to worry about. If there was anything to worry about, they would have already contacted us with instructions. Then she said, “Besides, it’s only a category 1.” OMG, “ONLY A CATEGORY 1″….ok, if she’s not worried, I’m not worried. But that’s still funny to hear. I guess at home in California we would say, “It was only a 5.2” but to foreigners that may seem a little alarming. So we packed up most of our stuff in case we had to move quickly during the storm. Sat around a little bit and watched the surf build a little bit. A rain squall pushed through and then we decided to go to Tulum.

It was windy and a bit cloudy skies with a little shower here and there. Other than that it was a lovely morning/afternoon at Tulum. The cloudy skies brought a welcomed shield from the sun. We walked through the shops, paid 5 pesos to use the bathroom then headed out to the ruins. Bought our tickets, went in walked around, took some photos, observed an army of ants on the move  and headed back to the shops to do some final souvie shopping. We ended up scouring EVERY SINGLE SHOP looking for a certain something that we never found (at least for the price we wanted anyway). We left empty handed and headed back to Akumal for lunch and final hurricane prep. 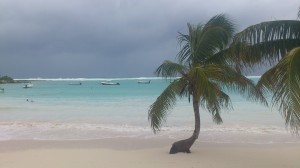 On our return to Akumal, we had lunch at Turtle Bay Cafe and did a little more shopping at some of the local shops. Alyssa haggled them down to a decent price to get what she wanted. We asked the restaurants if they will be open tonight, most replied yes, until 8pm. Ok, so we’re not going to starve, besides, we did buy some food at the store just in case. Interestingly, Mexico’s president ordered the halt of liquor sales after 1PM in preparation for the hurricane. I guess he wanted his citizens to be safe, rather than drunk. Good thing we had bought cerveza earlier! We finished our shopping only to find the wind picking up and a little rain falling. The sky was turning wicked dark and we decided it was time to head back home to hunker down for what we didn’t know a the time was going to be a VERY LONG NIGHT.

As darkness crept in, the winds got stronger and stronger. An occasional squall would roll through bringing horizontal rain that hit the windows with such force that it seeped through the seems and puddled on the floor. With nothing better to do, we both sat on the sofa looking out and Facebooking. Power and internet were still working, but not for long. Predictably so, we lost power, but only for about an hour or so. I had a flashlight with fresh batteries (I always travel with a flashlight) so we had some light. Not to mention we made sure all of our electronic devices were fully charged and tablet computers give off a fair amount of light. So we sat in the dark and ate ice cream. To our delight, what we thought was vanilla turned out to be coconut. It was delicious. 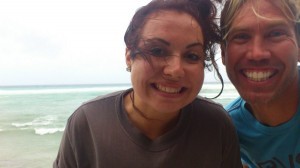 Yaay we’re in a hurricane!

The storm kept building and building. The wind was howling and whistling through the doors and windows. The hurricane shutters were banging against the building  a little bit. They hand’t closed all of them so we could still see out of all our windows enough to see the trees bent over and waves crashing high on the beach below.

Getting updates from family and friends and constantly checking NOAA for hurricane news, we waited as the storm made landfall to the south of us. We were just on the edge of the hurricane vs. tropical storm force wind warnings. We thought the worst was over as the storm moved inland and would weaken. Little did we know that was just the beginning. The wind built and howled for the next few hours. We both sat there looking at each other each time the building, doors and windows would shake. It just kept getting worse.

We tried for bed around 11:30. I settled in and managed to doze off for a few hours only to be awoken by a horrible deep rumbling noise about 2:30. The storm was still raging outside and the strong winds created this deep droning rumbling sound. The bouts of rain slapped against the windows like thousands of tiny firecrackers. 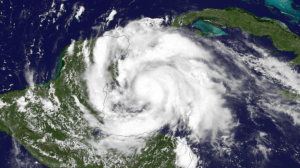 Yeah, we were in that.

I was starting to get a little worried. NOAA updates their site every 3 hours. I though the storm would weaken over land and would slow down shortly after landfall. Here we are 6 hours after landfall and it is still apocalyptic outside. Seriously, is this ever going to end? 3:30, 4:30, 5:30 no end in sight. Friends waking up on the east and west coasts are telling me to hang in there. I seriously had NO IDEA this storm would be so intense FOR 16 HOURS.  Take the worst thunderstorm you’ve ever been in, multiply it by 10 with sustained blowing wind and now have it last for 16 hours. That’s what Ernesto was like for us. I was beginning to worry whether it would calm down enough for us to make it to the airport.

Posted under Photos,travels
Comments Off on Aventura Mexicana – Day 7 – Tulum and Hurricane Ernesto